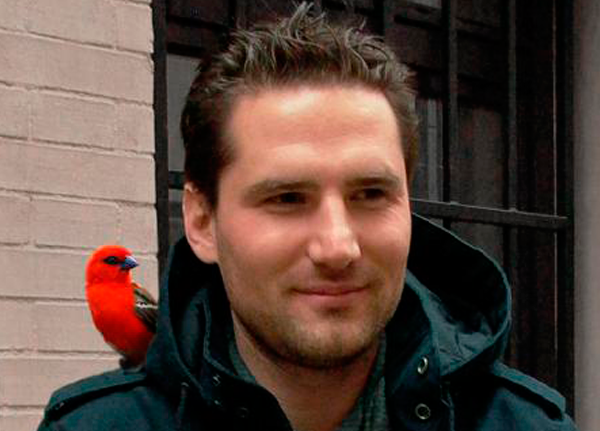 A true hybrid, Yves Geleyn was brought into the world via the love of a German lady and a French man in Reading, England (of all forgotten places). After this unfortunate false start in life and the fact that burning wax crayons and making hand paintings was his most loathed past time activity, our dear little Yves landed in Paris, the capital of culture. Here, surrounded by the delights of a rich artistic history, he embarked upon a flourishing early career in….rugby! Position: Lock no 04. Well, he is six foot two! Obviously the rigorous and strict education of playing with the oval ball had him standing in good stead; and after a brief moment when he set his sights on becoming a French chef extraordinaire, he finally took on the less fattening option of becoming a graphic designer.
Yves studied art in Paris and started as a freelance graphic designer, mainly doing print, poster designs, book and CD covers, but also noticeably a few installations and signage for large museums and other cultural establishments. But it is with animation that Yves fully began expressing himself. Soot Giant, a story of a long-legged giant that wanders the street at dusk, was one of his first animated creations that completely turned him towards motion.
Since then he continues developing his style on other projects like Kotori (a fabric Haïku), Dandelions (an ode to nature and rebirth), and Zune (a funny tale about the search for the greatest Mother’s Day gift). But it is very recently, with La Gaîté Lyrique, that Yves pushed his imagination even further. This lyrical mystery piece with enigmatic weightless forms and a bestiary of magic creatures, gives a new dimension to his work.
Each of Yves’ projects shows us his sensibility, his delicacy and poetry. His references are numerous: Japan, nature, animals, paintings and especially birds (which are present in all of his productions). Yves is used to saying he is not a director but a storyteller; for story and characters are the most important things to him.
With a love of mixing various techniques, Yves has found that the technique is always only there to serve the story. Textures, colors, forms, patterns, illustration, CG, paper cutouts and traditional animation are all his giant toolbox that he likes to unpack and use, as the project develops and grows. Yves constantly surprises us with his new projects, all a delightful expression of this true hybrid in motion.

ABOUT THE ARWORK
The Bear & the Hare is the first John Lewis campaign to embrace the emotive power of animation, a filmic technique so evocative of Christmases gone by.
Elliot and Yves took the two most traditional and time-honored animation processes – stop-motion and traditional hand-drawn 2D animation – and combined them to create something innovative and unique. Their aim was to do almost everything in camera, using real lighting, lens and film craft to build a world where the audience can see and feel the painstaking work behind it. The 2D animation’s physical interaction with the set and the human imperfections inherent in the process create a hand-crafted piece full of heart and integrity.
The animation process involved constant shifts between 2D and 3D worlds. In order to achieve this complicated combination the whole film was first created in Blinkink Studios as a 3D previsualization animatic with all the sets and characters built to scale. This allowed everything to be developed and planned alongside the model-makers and animators, thus integrating the different disciplines and processes before the set was built or the characters were printed.
Aaron Blaise (Brother Bear, The Lion King, Mulan) and his team of veteran Disney animators at Premise Entertainment in Orlando, Florida, designed and animated the characters. The 2D-animation frames were printed onto mounted paper and cut with a laser. Each frame (nearly 4,000 in total) was then individually hand-labeled before going on set. Feature-film stop-frame animators then spent 6 weeks bringing the world to life.
The set was built by our production designer John Lee (Aliens, Fantastic Mr Fox, Frankenweenie) and his team at Shepperton Studios before being transported to Clapham Road Studios ready for the stop-motion shoot.
Post-production was done in-house in Blinkink’s animation studio, and the final grade was completed at MPC.

ABOUT THE ARTWORK
Yves Geleyn’s latest spot for the Rice Krispies brand lives beautifully in the world of tactile animated works — a vibrant and colorful jungle of paper, fabric, and paint, where hand carved wooden dinosaur puppets and Rice Krispies live in playful harmony.

All session by Yves Geleyn