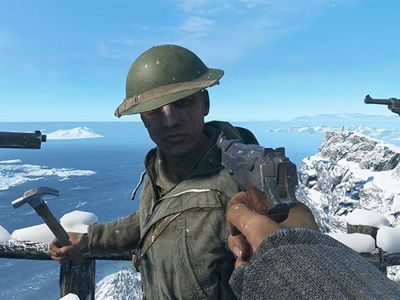 The artist, researcher and filmmakers collective and pseudo-marxist media guerrilla Total Refusal (Susanna Flock, Adrian Haim, Jona Kleinlein, Robin Klengel, Leonhard Mullner, Michael Stumpf) intervenes in current video games and writes papers about games and politics. Since 2018 it has been awarded with 27 prizes (and 11 honorary mentions) like the Diagonale Film Award for the Best Short Doc, the Contemporary Visual Arts Award of Styria Province and Vimeo Staff Pick Award among others. Total Refusal has been screened at more than 130 film and video festivals like Berlinale (2020), Doc Fortnight at MOMA New York and IDFA Amsterdam (2018) and they been exhibited at various exhibition spaces like the Architecture Biennial Venice 2021, the HEK Basel (2020) and the Ars Electronica Linz (2019).

How to Disappear
3D animation

Is it possible to desert in a shooter game? Along this question, “How to Disappear” reflects on war and game, discipline and disobedience. For the history of defiance is as old as the history of war – and yet the act of desertion goes beyond the game’s space of action. Shot in the martial yet picturesque war landscapes of the online shooter “Battlefield V”, the hyperreal graphics become the backdrop for an essay-like narrative. The narrator’s voice creates a crack through which physical-real realities penetrate the depoliticized fun stage of the game. Using performances and interventions in the digital battlefield, “How to Disappear” explores the scopes and limits of the audiovisual entertainment machine.