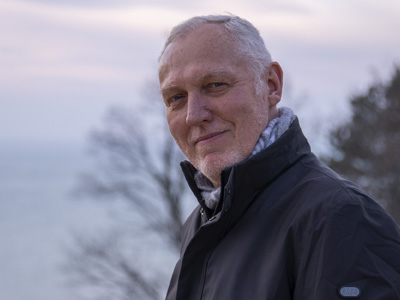 Scott Hessels (b.1958) is an American filmmaker, sculptor and media artist based in Hong Kong. His artworks span different media including film, video, online, music, broadcast, print, kinetic sculpture, and performance. His films have shown internationally and his new media installations have been presented in museum exhibitions focusing on technology as well as those presenting fine arts. His recognitions include patents for developed technologies, references in books and periodicals on new media art, and coverage in cultural media like Wired and Discover.

His work explores new relationships between the moving image and the environment. He produced some the first experiments in the fields of online streaming and locative media, and has mixed cinema with a range of emerging technologies including computational sensors, robotics, GPS systems, and alternative forms of interactivity. His data-driven works have included partnerships with key science and government organizations.

He studied and taught in the Design|Media Arts program at UCLA, followed by five years at The School of Art Design and Media at Nanyang Technological University in Singapore and is now an Associate Professor at The School of Creative Media in City University of Hong Kong.

He is also currently the executive producer of the Extreme Environments Programme which organizes expeditions to environmentally significant sites where interdisciplinary student teams collect data and return to interpret their findings as new media artworks in a public exhibition. He has produced and led art and science expeditions to Tibet, Hainan (China), the Mojave Desert, underground caves in Vietnam, scuba diving in the Coral Triangle, and Antarctica.

From 1987 to 2004, he was a founding member, producer and writer for Damaged Californians, a Los Angeles-based video, film and performance collective. Producing with P. James Keitel, they released several short-form art videos, feature films and experimental documentaries, performed in live events around Los Angeles, and produced innovative online works.

The work is a series of 100 photographs that do not exist, described by the artist during his travels and sent to friends as blank postcards.  The illusory images reveal their intended subject but also the flaws and accidents of the ‘photograph’ itself, illuminating the humor, heartbreak and wandering sadness of the artist on the road.

As the image becomes less trusted, less fixed in place, the work considers a potential return to oral storytelling traditions.  The narrator is not telling of the places he’s seen, but explaining the photograph.  This unseen object becomes an additional step between reality and imagination, and highlights how the truths found while traveling are inherent in the experience.

Originally Produced for 404 International Festival of Art and Technology, Argentina, 2020.