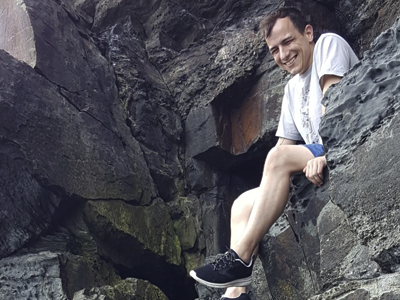 I became interested in Conway’s Game of Life during my junior year after encountering examples of what can be modelled by the algorithm. I developed an android application to visualize and play with the grid and to essentially “paint” cells on and see how the system evolves by each change. During Spring 2018 I pitched an idea of using solenoids to push/pull tiles in a large physical grid to display the the Game of Life (GoL) in a tangible and spatial way. After running the numbers for cost and power requirements and realizing how absurd it would be, I searched for an alternative way to display the information while maintaining the visual appeal. I toyed with multiple concepts before playing with an empty can of seltzer and realizing it could be a rotating barrel which made me think “Hey, I wonder how those train station ticker boards work?”

Based on Conway’s Game of Life (GoL), a simulator for cellular automata developed by John Conway in 1970, GoLUM is a physically changing display utilizing the same concept as split-flap alarm clocks and train station ticker arrival boards. GoL is a “Zero-Player” game, once the initial board has been set it’s hands off from there to watch the board evolve through each step. Each set of 4 vertical cells is represented by one split-flap segment in GoLUM with 576 cells being represented in total.