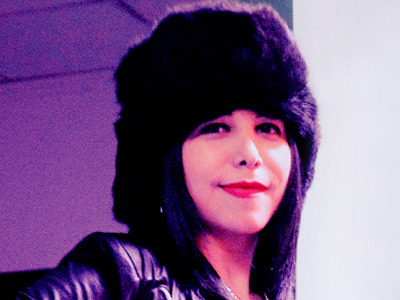 Full Professor at the Faculty of Humanities and Arts of the National University of Rosario.

Gina Valenti® is an artist, music composer and writer that holds a PhD on Education and a Fine Arts degree at the National University of Rosario (Argentina), where she is Full Professor on Projects, Art and Technology and directs the Center of Studies on Arts, Technology and Education “Ctrl+Z”. She is the founding director of the “404 International Festival of Art and Technology”, that has been presented for 19 years in twelve countries: Argentina, Italy, Switzerland, Belgium, Austria, Spain, Taiwan, Russia, Colombia, Japan, the United States and France. She has been Jury at the XII International Workshop of Architecture (Universidad Mayor de Santiago de Chile), at the China University of Technology in Taiwan, at the 36° Digital Art Festival VideoFormes (France), at the 5th Digital Arts Festival of Taipei (Interactive Art Category at the Digital Arts Awards), at FINNOF (National University of Rosario) among others. She was awarded by the National Fund Of the Arts and won the AVE Scholarship, obtained through a competition in the Faculty of Humanities and Arts of the U.N.R. She has taught courses and seminars about Art and Technology at the National University of Rosario (Argentina), “Olga Cossettini” School, Argentinian Library, Rodchenko Art School (Moscow, Russia), National Arts University of Taiwan and University of León (Spain), and “Colombia 4.0” in Bogotá, Colombia. Her visual works have also been presented at the Municipal Art Museum Juan B. Castagnino and Museum of Fine Arts Caraffa (Argentina), Center of Modern Art of Madrid (Spain), and the Goethe Institut (Trieste, Italy). As musician, she performed at “El Círculo Theater” (TEDx Rosario), House of Culture of the National Endowment for the Arts (Buenos Aires) and many venues during 20 years, in other different cities: London, Vienna, Hasselt, Taipei, Rome, Moscow. Her literary work and research work have been published by the Faculty of Political Science and International Relations of the National University of Rosario, Argentina, the Department of Technical Science and Graduate of UNCuyo and many compilations and journals from Argentina and abroad, having been been translated into English, Italian, Russian, Taiwanese and Japanese. She has been interviewed by several media such as: NKH (Japan), Taipei Times (Taiwan), Clarín, Página 12, El Ciudadano, La Capital, CN23, Canal 5, Canal 3, Rock&Pop, Vorterix (Argentina), “Szene” (Switzerland), “In & Uit” (Belgium), “Il Piccolo “(Italy) and “Art Fairs International” (New York, United States).

Spectacle has trapped us outdoors, and we have been left inside, under an open sky. Theatrical metaphors are now being used off stage; they even make more sense without it. Through everyday sets, invisible stages, anonymous directors, ghost writers and sponsors, the spectacle has become part of the system’s DNA. What narrative teaches us not to listen to the instructions of its own script?