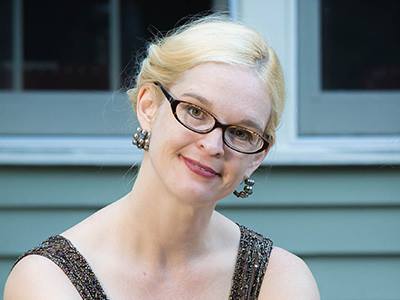 Ms. Wetmore is an Associate Professor of Art at the University of Massachusetts, Lowell. Ellen Wetmore’s artworks inspire a blend of humor and horror. Her work focuses on lived experience blended with well-honed paranoia, using her body as the primary vehicle. Wetmore’s video projects have been featured in screenings at the Sandwell Arts Trust in the West Midlands, UK, Ciné Lumière in London, the Dorsky Gallery in Long Island, NY, Currents, Santa Fe, CologneOff, Cologne, Germany, Videoholica in Bulgaria, and the MIA screen in Cairo. Her most recent work is on the 80-foot tall 7-screen marquee at the Boston Convention and Exhibition Center. She is a 2012 School of the Museum of Fine Arts Traveling Fellow and a finalist for the Museum of Fine Arts Boston solo show award. In 2014 she was the subject of an exhibition at the Sarah Doyle Gallery of Brown University and, in 2015, a solo show at Living Arts of Tulsa. She was a summer 2015 visiting artist at the American Academy of Rome and served as a juror for the video dance festival InShadow of Lisbon. In 2016 she was a resident at Signal Culture in Owego, New York, and a finalist for the Georgia Fee Residency in Paris.

Waiting Room is an art installation featuring an interactive video projection, a couch, and an audio composition in which visitors can insert themselves into the artwork’s video memory and projection stream by sitting on the couch, thereby becoming part of the work.

All session by Ellen Wetmore