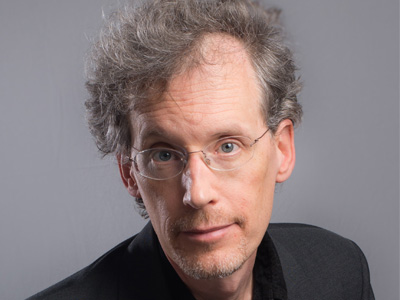 Bret Battey (b. 1967) is a Professor of Audiovisual Composition at the Music, Technology, and Innovation Institute for Sonic Creativity at De Montfort University, Leicester, UK. He creates electronic, acoustic, and audiovisual concert works and installations, with a focus on generative techniques. He has been a Fulbright Fellow to India and a MacDowell Colony Fellow, and he has received recognitions and prizes from Austria’s Prix Ars Electronica, France’s Bourges Concours International de Musique Electroacoustique, Spain’s Punto y Raya Festival, MADATAC and MuVi4, Abstracta Cinema of Rome, Amsterdam Film eXperience the Texas Fresh Minds Festival, and the Red Stick International Animation Festival.

Three Breaths in Empty Space is a contemplative audiovisual installation for two-screen-wide projection and quadrophonic sound.

Phenomena arising and passing in Emptiness.
Striated nerve patterns in the body-mind,
Quantum foam on an invisible wave,
Fragments of a vast nebula.
Shimmering instabilities.

Is this how essence hides?

Carlo Rovelli’s The Order of Time (2017) was an influence as I developed Three Breaths:

We cannot think of the physical world as it were made of things, of entities. It simply doesn’t work. What works instead is thinking about the world as a network of events… A wave a not a thing, it is a movement of water, and the water that forms it is always different. (p. 89)

The work is also an homage to the composer Maurice Ravel, with the overall harmonic character derived from the opening of his piano work Ondine (1908). Additional spectral effects were applied to recorded excerpts of Ondine, plus renditions of slowed melodic fragments from the work arise at the peak of each of the three “breaths” in the video loop.

Another inspirational image also comes from Ravel – from his preface to the score of La Valse (1920):

Swirling clouds afford glimpses, through rifts, of waltzing couples. The clouds scatter little by little; one can distinguish an immense hall with a whirling crowd. The scene grows progressively brighter. The light of the chandeliers bursts forth at the fortissimo. An imperial court, about 1855.
(Translation from Phillip Huscher from programme notes for the Chicago Symphony Orchestra)

So this idea of something subtle, cloudy and blurred that develops and blossoms into a moment of seeming clarity — the formation of this dynamic state that we think of as the “real world” — was a guiding concept for the breaths/arcs of Three Breaths. Beauty like Ondine is also like water – arising in a culture, transforming, and ultimately disappearing. Buddhist vipassana practice also influenced this contemplation of impermanence. In the meditation practice, one can, by observing the sensations of the breath very closely, experience the normally solid-seeming body simply as a field of particulate sensations, becoming more and more delicate and sparse, and even disappearing altogether in flickering mind-moments. Thus, we can observe impermanance at many levels, from cosmic transformations to the transformations of a culture to our own perceptions of the body.

Three Breaths in Empty Space was commissioned by Phoenix Cinema and Gallery, Leicester, with the support of Arts Council England, to celebrate the 10-year anniversary of Phoenix’s move to Phoenix Square. The installation premiered Nov 19 to Dec 31, 2019.