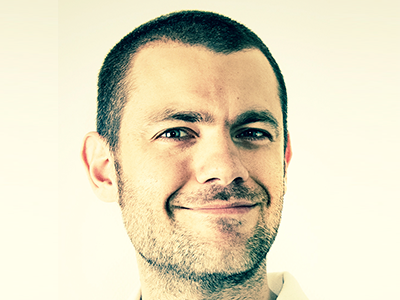 Born in 1975, Squizzato began a full-time painting career in 2013, after fifteen years of creative direction in the digital advertising industry. He reached the limits of the system – inventiveness for brands – to finally feel the urgency of his own creation and realize a vital need to free his imagination.

As a polymorphous artist, Squizzato is a permanent seeker. A free mind, in search of meaning to escape the dictatorship of instant information, to observe a cynical vision produced by a sanitized marketing world. Squizzato uses the technology of his time, digitized, rationalized, as well as oil techniques from the old masters.  He constantly challenges himself, while being inspired by movements that have always influenced; Cubism, Constructivism and Suprematism, Bauhaus, and lately Pop-Surrealism.

Most of his works depict a dual society of networks and loneliness, the transfiguration of identity through screens and devices. After the year 2014, which was totally dedicated to workshop life,  more than 100 paintings realized and several exhibits with encouraging reviews, it looks obvious that a new movement is beginning.

Squizzato evokes the end of an era, the coming expiration of unlimited growth and globalized consumption. He is portraying a world where realtime information and access to material goods are not yet enough to balance frustration with the enjoyment of owning.  A world that he has fed for many years. Squizzato found no existing genre in which to classify his work, and decided to establish Pop-Constructivism to call for a need for change, objective forms carrying universal meaning, hybridization with new media and the use of minimal, abstract or surrealist patterns to serve the unique world of the artist.

In each of his paintings, one will find no sanctions or one way visions, but a call for free will, wandering imagination,  and the start point for discussions.

“Love in the City“

The emergence of Pop-Constructivism.
A discharge of energy, noticeable chromatics and a prominent graphic style.

All session by Antony Squizzato