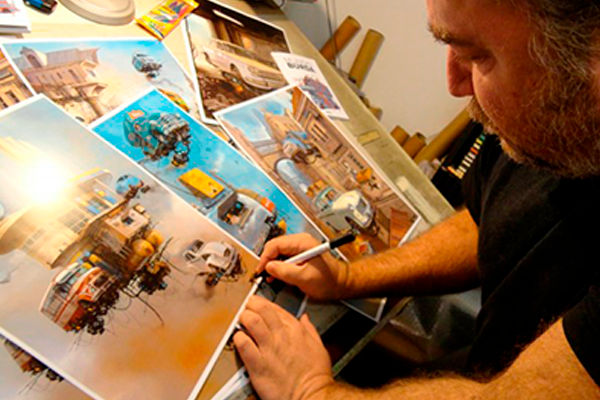 Alejandro Miguel Burdisio, artistically known as Burda, was born in Cordoba city on May 9, 1966. He has always been a self-taught artist, devoted to drawing, painting and illustration in a professional way since he was 19 years old. Within his academic formation it is emphasized his passage (incomplete) by the faculty of architecture of Cordoba, fundamental fact in his formation as an illustrator and designer. With over 25 years of experience as an illustrator, he now has his own graphic and architectural studio (named after him) where he works in partnership with a multidisciplinary team for the local and foreign media.

Dedicated for a long time to “fantasy art”, which currently allows him to participate in animation productions, short films and movies as a concept artist. Today he is working as an art director at the Lighthouse production company. He travels giving lectures of training and dissertations through different universities of the country and Latin America.

He is currently working for various production companies doing concept art for animation, series and movies. “Universo Chatarra” (Junk Universe) is a dieselpunk vision of a dystopian future, in which the aesthetics of certain times of the last century are combined with futuristic brushstrokes and where humor, irony and absurdity also appear as imprints.
The images that are outside of that series, belong to Concept Art and address various themes, continuing with the search for plasticity in digital painting.